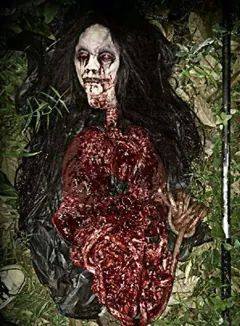 The Penanggalan or ‘Hantu Penanggal’ is a ghost of Southeast Asian folk mythology. It is a variation of the vampire myth found in the Malay Peninsula, or as Balan-balan in Sabah. It is similar to the Manananggal, a similar creature of Filipino folklore. “Penanggal” or “Penanggalan” literally means “detach” or “remove”. Both terms—Manananggal and Penanggal—may carry the same meaning due to both languages being grouped or having a common root under the Austronesian language family, though the two creatures are culturally distinct in appearance and behavior. There are similar myths of creatures with almost exactly the same features. Among ethnic groups in Indonesia, the ghost is called Leyak among the Balinese, Kuyang by theDayak people of Kalimantan, or Palasik (or Pelesit) by the Minangkabau people. In Thailand it is called the Krasue, in Laos it is the Kasu or Phi-Kasu and in Cambodia it is the Ap. According to the folklore of that region, the Penanggalan is a detached female head capable of flying about on its own. As it flies, the stomach and entrails dangle below it, and these organs twinkle like fireflies as the Penanggalan moves through the night. Due to the common theme of Penanggal being the result of active use of black magic or supernatural means, a Penanggal cannot be readily classified as a classical undeadbeing. The creature is, for all intents and purposes, a living human being during daytime (much like the Japanese Nukekubi) or at any time when it does not detach itself from its body. 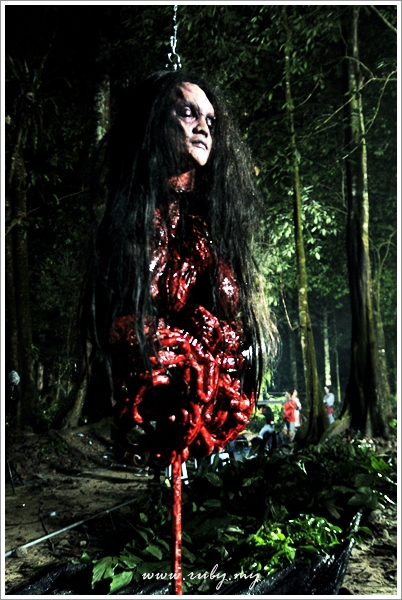 In Malaysian folklore, a Penanggal may be either a beautiful old or young woman who obtained her beauty through the active use of black magic,supernatural, mystical, or paranormal means which are most commonly described in local folklores to be dark or demonic in nature. Another cause where one becomes a Penanggal in Malaysian folklore is due to the result of a powerful curse or the actions of a demonic force, although this method is less common than the active use of black magic abovementioned. Penanggalan was also being mentioned in Hikayat Abdullah, written in 1845, much to the amusement of Sir Stamford Raffles.[1] The Penanggalan is usually a female midwife who has made a pact with the devil to gain supernatural powers. It is said that the midwife has broken a stipulation in the pact not to eat meat for 40 days; having broken the pact she has been forever cursed to become a bloodsucking vampire/demon. The midwife keeps a vat of vinegar in her house. After detaching her head and flying around in the night looking for blood the Penanggalan will come home and immerse her entrails in the vat of vinegar in order to shrink them for easy entry back into her body. One version of the tale states that the Penanggal was once a beautiful woman or priestess, who was taking a ritual bath in a tub that once heldvinegar. While bathing herself and in a state of concentration or meditation, a man entered the room without warning and startled her. The woman was so shocked that she jerked her head up to look, moving so quickly as to sever her head from her body, her organs and entrails pulling out of the neck opening. Enraged by what the man had done, she flew after him, a vicious head trailing organs and dripping venom. Her empty body was left behind in the vat. The Penanggal, thus, is said to carry an odor of vinegar with her wherever she flies, and returns to her body during the daytime, often posing as an ordinary mortal woman. However, a Penanggal can always be told from an ordinary woman by that odor of vinegar.

The Penanggalan’s victims are traditionally pregnant women and young children. Like a banshee who appears at a birth rather than a death, the Penanggalan perches on the roofs of houses where women are in labour, screeching when the child is born. The Penanggalan will insert a long invisible tongue into the house to lap up the blood of the new mother. Those whose blood the Penanggalan feeds upon contract a wasting disease that is almost inescapably fatal. Furthermore, even if the penanggalan is not successful in her attempt to feed, anyone who is brushed by the dripping entrails will suffer painful open sores that won’t heal without a bomoh’s help. A Penanggal is said to feed on human blood or human flesh although local folklore (including its variations) commonly agrees that a Penanggal prefers the blood of a newborn infant, the blood of woman who recently gave birth or the placenta (which is devoured by the Penanggal after it is buried). All folktales also agree that a Penanggal flies as it searches and lands to feed. One variation of the folklore however claims that a Penanggal is able to pass through walls. Other, perhaps more chilling, descriptions say that the Penanggal can ooze up through the cracks in the floorboards of a house, rising up into the room where an infant or woman is sleeping. Sometimes they are depicted as able to move their intestines like tentacles. The most common remedy prescribed in Malaysian folklore to protect against a Penanggal attack is to scatter the thorny leaves of any of the subspecies of a local plant known as Mengkuang, which has sharp thorny leaves and would either trap or injure the exposed lungs, stomach and intestines of the Penanggal as it flies in search of its prey. These thorns, on the vine, can also be looped around the windows of a house in order to snare the trailing organs. This is commonly done when a woman has just given birth. However, this practice will not protect the infant if the Penanggal decides to pass through the floorboards. In some instances, it is said that months before birth, family members of the pregnant women would plant pineapples under the house (traditional Malay houses are built on stilts and thus have a lot of room underneath). The prickly fruit and leaves of the pineapple would deter the penanggalan from entering through the floorboards. Once trapped, a Penanggalan who attacks the house can then be killed with parangs or machetes. As an extra precaution, the pregnant woman can keep scissors or betel nut cutters under her pillow, as the Penanggalan is afraid of these items. Another way of killing the vampire is for some brave men to spy on the Penanggalan as it flies around in the night. Midwives who become Penanggalans at night appear as normal women in the daytime. They, however, can be identified as Penanggalans by the way they behave. When meeting people they will usually avoid eye contact and when performing their midwife duties they may be seen licking their lips, as if relishing the thought of feeding on the pregnant woman’s blood when night comes. The men should find out where the Penanggalan lives. Once the Penanggal leaves its body and is safely away, it may be permanently destroyed by either pouring pieces of broken glass into the empty neck cavity, which will sever the internal organs of the Penanggal when it reattaches to the body; or by sanctifying the body and then destroying it by cremation or by somehow denying the Penanggal from reattaching to its body upon sunrise. Another non-lethal way to get rid of penanggalan is to turn over the body, so that when the head attached back it will be attached reverse side, thereby revealing to everyone what she really is

Almost Everything Is Here!